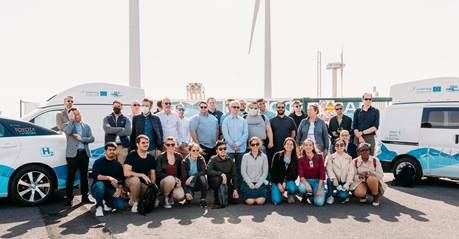 The ESRs of Solar2Chem were active part of the organization of the event “Hydrogen Islands, opportunities and challenges” together with Seafuel project and the Hydrogen Triple Alliance. The first day of the event was an opportunity to hear from presentations from policy makers, companies working in the energy sector and local entrepreneurs about the role that hydrogen can have in the clean energy transition in islands. The second day was dedicated to the visit of the Seafuel hydrogen refuelling station placed at the Institute of Technology and Renewable Energies (ITER) of Tenerife, an opportunity to see an example of technology scale-up to industrial levels.

The third day was instead dedicated to the Solar2Chem x Seafuel symposium about technologies for the conversion of solar power into fuels organized by our ESRs. The event was in hybrid format, with the majority of speakers connected online but it was anyway a unique opportunity to discuss about the last scientific achievements in the (photo)electrocatalytic production of fuels.
The event started with the introduction of Solar2Chem project by Jokotadeola Odutola and Sebastiano Gadolini (picture below). Then Horatiu Szalad moderated the morning session where prof. Alexander Cowan had a speech on the electrocatalytic reduction of carbon dioxide going from molecules to materials, then prof. Gabriele Centi presented the SUNERGY initiative and how solar to chemical energy storage can be a crucial technology for islands. Afterwards, the conversation focused on the scale-up of solar fuels technologies: prof. Adélio Mendes reported the last achievements in the design of photoelectrochemical devices; dr. Fatwa Abdi underlined the scientific pathways towards large-scale implementation of solar water splitting devices. To conclude, Francesca Lorenzutti guided the conversation of the round table with the first four speakers in which the possibilities of scaling up solar-driven electrochemical processes for the production of fuels to industrial level where analysed.

In the afternoon, Kathrin Naumann took the lead in the moderation of the new session where prof. Sophia Haussener described the photoelectrochemical devices designed to work with concentrated radiation and the innovative patented devices for the production of fuels from (photo)electrochemical water splitting of the companies Sunrgize and Enapter were presented by dr. Luis Villalba and dr. Gaia Neri, respectively. Dr. Brendan Flynn finally discussed about the European strategy in the development of policies for a transition to a hydrogen economy.

This website uses cookies to improve your experience while you navigate through the website. Out of these cookies, the cookies that are categorized as necessary are stored on your browser as they are essential for the working of basic functionalities of the website. We also use third-party cookies that help us analyze and understand how you use this website. These cookies will be stored in your browser only with your consent. You also have the option to opt-out of these cookies. But opting out of some of these cookies may have an effect on your browsing experience.
Necessary Always Enabled
Necessary cookies are absolutely essential for the website to function properly. This category only includes cookies that ensures basic functionalities and security features of the website. These cookies do not store any personal information.
Non-necessary
Any cookies that may not be particularly necessary for the website to function and is used specifically to collect user personal data via analytics, ads, other embedded contents are termed as non-necessary cookies. It is mandatory to procure user consent prior to running these cookies on your website.
SAVE & ACCEPT